We are interested in nanoelectrochemistry and single-entity electrochemistry. We use scanning electrochemical probe microscopy to study fundamental electrocatalytic processes for energy storage and conversion at the nanoscale to reveal their heterogeneity and stochasticity. We are also devoted to developing electrochemical sensors and on-demand drug release devices for biomedical applications.

We use colocalized imaging methods, including SECCM, AFM, TEM to characterize the activity and structure of electrochemical interfaces. In this way, we will not only reveal the heterogeneity but also elucidate its structural origin.

We will develop nanoscale electrochemical tools to precisely deliver molecules for biological studies with high spatial and temporal resolution, and ultimately for single-cell studies.

New phases are often formed during electrochemical processes, e.g., during battery charging. Controlling the nucleation and growth and the solid is important from preventing the dendrite formation for batteries of better performance, to the synthesis of nanoparticles for better electrocatalysis.

The formation of a new phase often would need a process called nucleation. Classical nucleation theory (CNT) suggests that there is a minimum dimension of the new phase that needs to be formed before the growth of the new phase is energetically favorable as shown in the Figure above. However, the nucleation events are often stochastic, and heterogeneous over the electrode surface.

To address this issue, we will use nanoelectrochemical techniques to probe the nucleation process and its dependence on the substrate structure.

Heterogeneity of the Electrical Double Layer

Electrical double layer (EDL) is ubiquitous in electrochemistry and is fundamentally important for the electrode/electrolyte interface. We are developing nanoscale techniques to probe the EDL structure and its dependence on the electrode structure. We have shown the measurement of local potential of zero charge (PZC) at Pt and Au electrode, and found the PZC value is dependent on the crystal orientation. 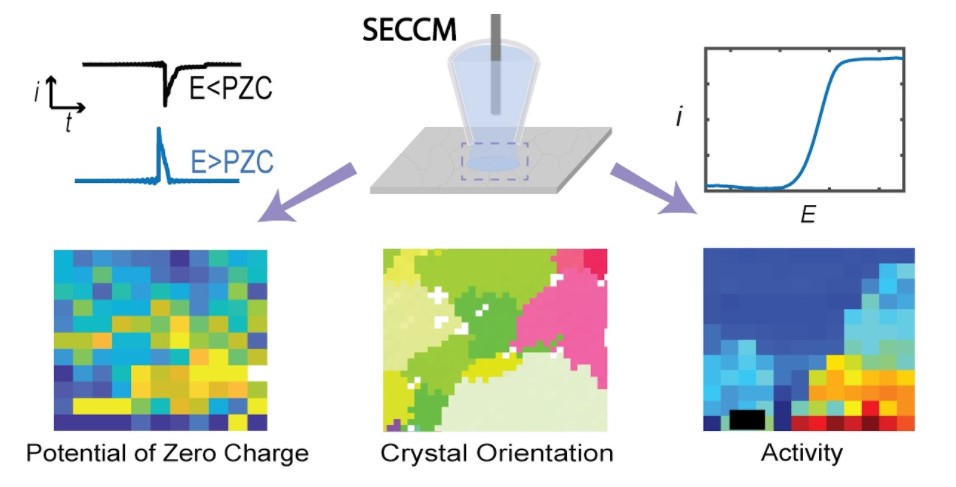